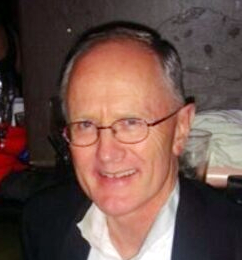 Our 21st century world values youth above all else. It lauds the merits of the young in a myriad of ways. Just watch the ads on TV tonight. Youth is good and to be desired. Old age, not so much. In fact, not at all. Old age is seen as bad. In our ageist society older people are often portrayed as doddery, frail, and not really with it. Growing older is feared. It's seen as a time of decrepitude. Even those of us who seek to follow Christ can be seduced into seeing ageing as bad. Why was I so pleased when someone told me after I preached recently that I looked 61 not 71? Because I don't like the thought of growing older. To some degree I've imbibed the spirit of the age. I fear losing control, although if COVID-19 has taught us anything, it's that much of life is beyond our control.

Robert Banks reminds us that ageing is normal. The ageing process, being biologically determined, is part of God's providence and is to be accepted with grace.1 However, that's easier said than done when the world constantly tells us that growing old is bad. And we observe firsthand, the effects of ageing on people we love. Ultimately, we have a choice to accept growing older, with all that process may bring or to live in denial. T.S. Eliot famously wrote in his poem, The Wasteland, that human beings cannot bear too much reality.2 The preacher in Ecclesiastes provides "a beautiful and poetic description of progressive fading and failing in each of the several faculties of the body.  It is a picture of sad and ineluctable deterioration and decay."3

I recently slipped while coming down our stairs in bare feet and bruised not only my dignity, but my arm, ribs and leg. Thank God that I avoided any broken bones, but it was a salutary reminder that my balance isn't what it used to be and that I need to be more careful when descending stairs. I was also, two years ago, diagnosed with early-stage Parkinson's Disease. The tremor in my left hand is yet another reminder of my mortality. Covid and Parkinson's have both been encouragements to face my mortality head on and to review my life direction. Given the challenges growing older can present us with it would be easy to succumb to the world's view of ageing as a period of remorseless decay.

A biblical view of ageing

However, there is another way of viewing ageing. The psalmist reminds us that those who trust in the Lord will "still bring forth fruit in old age; they will be full of sap and green." (Psalm 92.14 – ASV). The late Billy Graham in his book, Nearing Home, tells the story of the missionary to India, Dr E. Stanley Jones.4When he was eighty-five Stanley Jones had a stroke that disabled him and impaired his speech. Despite the stroke he managed to dictate his last book, The Divine Yes, and address a world congress in India from his wheelchair shortly before he died.5 He wrote, "In old age … blossom at the end like a night-blooming cereus."6 6Billy Graham writes that the night blooming cereus, a family of flowering cacti, brings a beauty to the desert when it blooms at nightfall:

E. Stanley Jones certainly knew about blossoming in the night-time of life and producing fruit, despite disability.7 Billy Graham asks "Do we, the older generation, do the same? Are we replenishing fruit that replenishes others or do we complain about our circumstances and drain others who look forward to living full lives? By our attitudes do we make younger [people] dread the inevitable – growing old? Many elderly people, without realising it, taint the purpose God has for them: to impact the younger generation/s by exemplifying reliance on Him and hope in His unchanging promises. We should be content for Jesus has said, 'I will never leave you, nor forsake you.' " (Hebrews 13.5 NKJV).8

In her book, The Gift Of Years, Joan Chittester argues that "old age is not a disease. It is strength and suvivorship."9 Chittester writes:

When we ignore the fact that all of us are on an inexorable journey to our own old age, we miss the gift of years. We miss the profound insight that we are never too young to begin to see ourselves as old, to imagine ourselves as now, at this moment, shaping what we will be in the years to come – as well as the way we will become it. All of us will sooner or later arrive at the point where we are beginning to imagine ourselves entertaining the final stages of our lives and asking ourselves seriously, quietly, what kind of person we want to be then, so that we can begin to be that kind of person now.10

Since CMA began our Q4/Fourth Quarter ministry six years ago we have interviewed more than three hundred Australian Christians in their retirement years/fourth quarter. The common denominator in all their lives has been the determination to continue to make a difference for the kingdom of God no matter how old they are. More than 80 people have now completed our seven-session course, Engaging Q4, built around seven spiritual disciplines designed for people in their fourth quarter. They are involved in a wide range of ministries and activities from serving in and through their local church to Kids Hope, Mainly Music, Men's Sheds and visiting nursing homes.

Often people protest that they're not yet retired, which isn't the point. The fourth quarter begins for men in their early 60s and for women in their mid-sixties. It's not about whether we are in paid or voluntary work. Many of us will live for twenty-five or thirty years past retirement age. The real question, the biblical question, is what use will we make of that time as followers of Jesus?