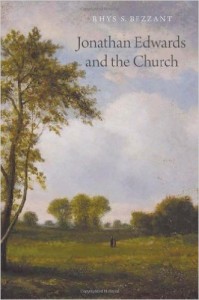 Although Jonathan Edwards wrote and preached on an exceedingly wide variety of theological subjects, many scholars declare that he did not have any independent ecclesiology. Rather that his ecclesiological impulses were driven by social and broader theological focuses. In Jonathan Edwards and the Church Rhys Bezzant demonstrates that Edwards actually held a robust ecclesiology that took into account both social and theological drivers. Bezzant sets out to expound Edwardsean on his oft-repeated model of the church as a ‘focused domain where God’s promises, presence and purpose are to be discovered.’ (ix) In doing so he opines that Edwards’s ecclesiology was ultimately ‘a revivalist ecclesiology within a traditional ecclesiology of nurture and institutional order.’ (xi)

In order to investigate Edwards’s ecclesiology Bezzant follows a diachronic model, describing the various aspects of Edwards’s ministry, writings and church engagement throughout his life. In chapter one Bezzant paints a rich picture of the church world of the New England colonies before Edwards’s ministry, highlighting a vast array of ecclesiological and social pressures upon the Puritan endeavour. Chapters two, three, and four trace Edwards’s ecclesiological development through the three primary stages of his life— delineated by two works A Faithful Narrative in 1735 and A Humble Attempt in 1747. Bezzant traces Edwards’s reflections from his less-conventional conversion narrative through his early life, developing theology and burgeoning ministry—the period heavily influenced by the Great Awakening—and then into his mature ecclesial ministry and global focus. These chapters mine the depths of Edwards’s own writings—recently published as a letterpress edition by Yale University Press—as well as the copious secondary literature on the variety of topics. Within the investigation of Edwards’s writings these chapters are shaped by the contours of the New England history and are firmly set within their broader context.

Throughout Bezzant helpfully shows how wider theological and social concerns impacted upon the fledgling colonies and does not seek to divorce Edwards from his historical milieu. This dual focus assists in understanding Edwards’s ecclesiology as well as how it has shaped evangelical patterns in the following generations. Although there is little room for sustained modern theological reflection and application—likely a product of this forming a doctoral dissertation for the Australian College of Theology—the passion for the church of Bezzant and Edwards shines through and any astute reader will be able to draw concrete links and applications with ease. Observations such as Edwards’s description of the church functioning as a tree are ripe for reflection and harvest by the reader. (101) However, when the space permits, brief observations gleam from the text such as when Bezzant observes ‘the church is an expression not just of pastoral or apocalyptic functions but of prophetic aspirations too.’ (198)

In the final chapters Bezzant draws the themes of the book—and Edwards’s ecclesiology—together and highlights the weekly ecclesiological routine of Northampton and the broader New England church. This summary in chapter five focuses upon worship, discipline and polity and assists the reader in seeing how Edwards’s ecclesiological vision played out at a broader scale—even if imperfectly. Finally Bezzant reflects upon the ecclesiological tensions and pressures present within Edwards’s ministry and concludes that his ecclesiology ‘highlights the orderly processes but not the ordinary origins of the church’s life.’ (260) This organising theme of ‘orderly but not ordinary’ plays out throughout the book and helps to strike a balance between the extremes of each theme.

While Jonathan Edwards and the Church is aimed at an academic audience, the book will appeal to academics, clergy and intent readers of all stripes. It reads easily and engagingly covering a wide variety of theological and social topics with ease. From start to finish Bezzant is comfortable with Edwards as his primary interlocutor and with the host of secondary voices in the galleries. If there is one minor quibble it is that the diachronic path can make tracing certain theological themes hard at times, but not insurmountable. Although he provides little modern theological application, this is likely of benefit as the observations in Jonathan Edwards and the Church are at their best when properly digested and contextualised. Ultimately it is fitting to end with the words that Bezzant chose to end his book with:

‘His [Edwards’] insights, scattered amongst his works, can be for us today a modest lamp for our path, even when we struggle to fulfill our own calling to be a city on a hill.’ (260)